This is a post I never ever wanted to have to write.  And certainly not this soon after Oliver finished treatment.   The tests confirm that Oliver's AML has returned full force.  He will be readmitted to Primary Children's Hospital Monday, assuming his platelets and red blood cells hold out. 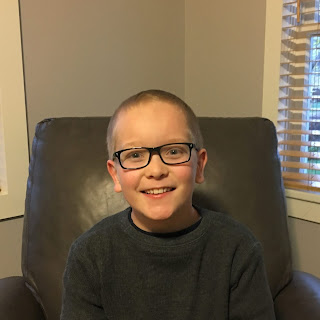 Because he has already had copious amounts of the chemo drugs designed to permanently treat AML and now resistant to most of them, a bone marrow transplant (BMT) is his only option.  The plan is for Oliver to undergo chemo with a new mix of chemo drugs to kick him back into a temporary remission and keep him in remission until he is able to undergo a BMT.  This will take a minimum of two rounds of chemo, each requiring about a month of hospitalization.  It is a certainty that there will be complications from his next rounds of chemo, we just don’t know exactly what these will be, whether they will be minor or major, or how long they will take to resolve.  In order for him to proceed with the BMT, though, they will need to be resolved.  There will be periods where he will be able to be home, but PCH will be his other home for the next several months.
Once Oliver’s blood is “typed”, we will have clear guidance of what steps need to be taken to find a donor match.  This will be a huge priority, but not until we have more information.
Because Oliver is Oliver, he is dealing with things by chasing bunnies and having tea parties with his little sisters, crocheting, making a list of the things he will be crocheting for others, and plotting crazy things to do with and/or to the (exceptionally fun and patient) PCH staff members he has grown attached to over the months.
We will continue to live with glaring uncertainty about even the most basic of things, but we will continue to find comfort in the certainty of God’s love for Oliver and the rest of us.