Day Plus 95: Laughter is the Best Medicine

It has now been just over fourteen months since Oliver was first diagnosed with Acute Myeloid Leukemia ("AML"). Except for a combined total of less than 150 days, Oliver has lived at Primary Children's Hospital since September 4, 2016.  During that time there have been long stretches when he was not permitted to leave his room, except to go down for procedures. His record for that was eight and a half weeks, which started shortly after he relapsed for the first time last spring. Despite everything, Oliver, in all of his eleven years, has yet to once complain of being bored and always seems to find the fun in things.

During his record two month room confinement, Oliver found many memorable, often surreal, means of entertainment. One Sunday morning, as he was being wheeled into the OR for an urgent procedure, a doctor empathetically told Oliver that she was sorry he had to be there. With a huge smile he replied, "I'm not, I get to leave my room!" In addition to the field trips, music, art and occupational therapy and reading, there were things like late night volcanos in the bathroom with Costco baking soda and vinegar, Oliver making Trisha Yearwood's slow cooker chocolate candy in his room, and Oliver enthusiastically watching and seriously discussing the Great British Baking Show and Chopped Jr., often while hooked up to TPN (iv nutrition) and always with a barf bag within reach.

After about six weeks, things took a really scary turn and his fevers never really stopped, getting out of bed was difficult, and the chances of Oliver ever leaving Primary Children's were next to zero. It was during this bleak time that Studio C went from being a long standing source of family entertainment and bonding (especially for Oliver and his cousins) to being a lifeline for us. At Oliver's insistence, Bill and I would spend hours watching Studio C sketches with him on his bed with his Kindle. Staff would often take the time to watch Oliver's favorite sketches, or share their own, with him. We loved being able hear Oliver belly laugh as he watched the sketches alone. We also loved participating in and overhearing Oliver's discussions about Scott Sterling, Captain Literally, Spencer, Kyle, and other gems of sketches, as well as funny ways Studio C could partner with Primary Children's. 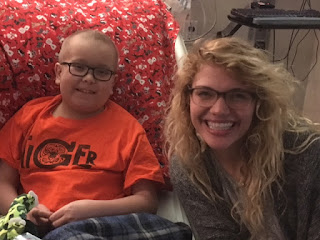 One day, Oliver was laughing so hard when we watched the Great British Baking Show sketch, he could not hold the Kindle still. I couldn't stop cry-laughing until at least the third time through, and may or may not have peed.

Unfortunately, Oliver's medical situation is currently more grim than it was last summer. But, Studio C has yet again brought much needed laughter and relief. Mallory Everton spent last Friday evening hanging out with Oliver at Primary Children's. He had grand plans of making DIY fake pooh with her and giving her a tour of the cancer unit, complete with the life flight landing on the roof, but was too sick to get out of bed. They ended up just chatting about life and playing games for a really long time. Oliver was completely thrilled, as were many others.

We are grateful that Studio C is around to make us laugh and that Mallory, as suspected, really is an awesome and truly lovely person in real life.

We are also grateful for everyone who joined in praying and fasting for Oliver last week. We really can feel the power and love of those efforts. Please don't let up!

As of right now, we are no longer seeing signs of leukemia in his spinal fluid.  That could change as he starts to grow white blood cells again, but for now it is a huge blessing.  We continue to take things on a day to day basis and hope for the best.