Hours after starting chemo Monday night, Oliver started having intense bone and abdominal pain that, despite best efforts, remained unmanaged for the next 36 hours. He required a temporary feeding tube for oral medication, which caused excessive bleeding in his stomach because his blood was not properly clotting.

They are done pumping all of the chemo into his body that they are going to this round. As soon as his blood counts fully drop in a few days, Oliver will start feeling the full effects of the chemo. For the next few weeks, he will need to be carefully monitored inpatient until his counts recover. He is incredibly exhausted and fevering pretty consistently, but now free of pain, managing the nausea and back to roaming the halls of the Primary Children's cancer unit and having fun.

We have met with the Bone Marrow Transplant team, which was a sobering experience to say the least. The good news is that they were able to find promising potential donor matches for Oliver. They are leaving his search open in the hope of finding the very best match possible. The chances of finding a more optimal donor match this late and in the community are slim. However, it is still way better than Oliver's chances were of getting AML, so we are not giving up. For many complicated reasons, having a young adult male donor is optimum. So, we are asking for ALL healthy young adult men (under 30) who would be willing to be a donor, to get on the National Bone Marrow Donor Registry (by signing up and doing a cheek swab test) as soon as humanly possible. You can start the process by going to www.bethematch.com  and signing up online or finding a local donor recruitment event. A few people have graciously volunteered to help organize some local donor recruitment events for and in honor of Oliver and we will post the details when we have them.

We realized that Oliver needs a BMT to survive and in order to even start the BMT process, he needs to be in remission. We realized the chemo rounds to get him into remission would he hard. We obviously realized the whole BMT process would be harrowing. But, being told it was not certain he would go back into remission, which is necessary for a BMT to happen,  is just now hitting us like a truckload of bricks. So much so, that for the first time since last September, I dreaded returning to the hospital after spending time at home with Oliver's sister, out of fear that I would not be able to keep it together for Oliver. But, walking into the cancer unit and seeing Oliver sitting BEHIND the front nurse's station, happily greeting people and discussing gross-but-true facts with the staff seemed to instantly change all of that. And made me genuinely enjoy an evening of playing pass the farting pig and watching Oliver bike down the halls. And helped turn me away from the fear and back to where I need to be facing. 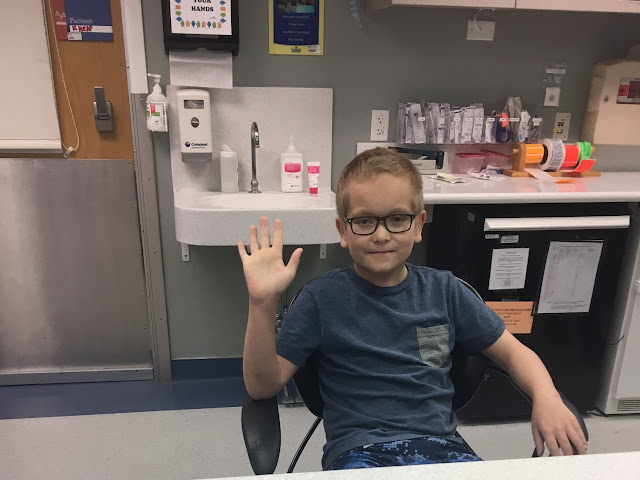 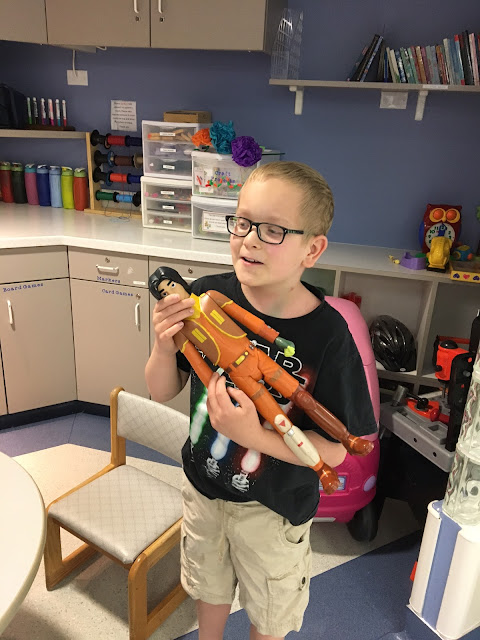