Before Oliver's hair even had a chance to fall out again, they found leukemia in his blood. A lot of it. He is pretty sick. His second round of chemo will start as soon as possible. If his bone marrow aspirate on Sunday shows that his leukemia cells have mutated to now have a new genetic marker as his blood work seems to indicate, his chemo protocol will include a drug that has shown some promise in killing leukemia cells with his (potentially) new marker. If not, he will be on a chemo protocol with well tested chemo and drugs that will begin to be studied at several children's hospitals in a few months.

We are taking things day by day, sometimes hour by hour.

To follow Oliver's philosophy and example, Bill and I  are choosing to try our hardest to keep a good attitude and find joy wherever possible.

Below are some pictures from earlier in Oliver's treatment. 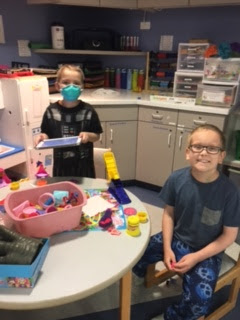 Last week Oliver discovered this song and has been singing it in his room a lot.