Day Plus 100 Something: This is not where we wanted to be

This is not where we wanted to be after reaching the 100 day post-bone marrow transplant ("BMT") milestone.  Or ever.  Oliver is now dealing with a malignant pericardial effusion (water around the heart) with a drain dangling from his chest, persistent and uncontrolled gut pain even with an aggressive morphine pump, signs of his aggressive form of acute Myeloid Leukemia ("AML") already showing up in his post-Mylotarg bone marrow, blindness in his left eye from bleeding, tremors and disorientation.

The doctors now believe that his leukemia is not going to be able to be cured by the treatment options they know about.  Due to his frailty and being only three months out from his BMT, all aggressive treatment is off the table.   As a last resort, Oliver is now on a drug called Dasatinib, which has shown some success in targeting a mutation associated with the genetic mutation Oliver's AML freakishly acquired post-BMT.  The catch is that there is no literature about it being used with Oliver's specific cancer outside the lab.  His oncologist, Dr. Verma, assures us that his chances are not zero or one percent, but not as high as five percent.

We are not giving up hope.  We both spent much of our adult lives identifying as atheist or agnostic.  During our decades of unbelief, hope looked very different to the two of us than it does right now.  The details of our faith journey are not important.  What is important is the fact that over the years it has become impossible for us to deny the existence of a God and of grace.

This knowledge leads to our hope being grounded in an eternal perspective.  We believe that Oliver's story is much bigger than what will happen in this life.  We know that his Heavenly Father loves Oliver more than we can imagine and His plans for Oliver are greater than we can comprehend.  We have felt the presence of His spirit every day since Oliver was first diagnosed with leukemia and know that the scriptural description of His attributes is accurate. He is love and we have felt His love and know that it is good.

We also believe in a God of miracles.  We have seen many miracles during the past fourteen months and will not rule out the possibility that God has an even bigger miracle lined up on the sidelines preparing to get on the field.  We pray for that miracle every moment of every day.

However, for us, Oliver himself is a miracle.  Neither of us has really done anything to deserve having such an amazing boy be part of our lives for a day, yet we have already been able to spend several years with him.  Every day we get to spend with him is a blessing we did not earn.  Every day is evidence of a God who loves us despite our inability to return that love in anything close to an equal way. 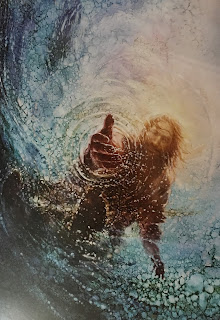